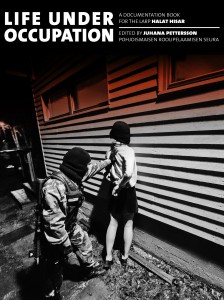 Read all about the larp in the Halat hisar documentation book! It’s available as a free download here.

Halat hisar was played 15th – 17th of November, 2013. Here’s photos from the game by Tuomas Puikkonen.

A test game of Halat hisar was run at Ropecon on the 27th of July, with 12 players, five organizers and two players for supporting characters. The idea of the test game was to try out concepts, characters and ideas from the big game in advance, so we would know what works, what doesn’t and what needs to be workshopped in advance.

The test didn’t represent Halat hisar in it’s final form, and events and details will probably be different when the main run of the game is held.

The setting was a meeting at the University of Helsinki between the administration, the faculty and the student union to discuss the visit of the Saudi Prime Minister, a known supporter of the State of Uralia. The main fault line of the game ran between possible financial support from the Minister and a desire to make a statement censoring a friend of the Occupation.

As the discussion ranged, Occupation soldiers entered, taking individual characters out for interrogation, looking for a Finnish freedom fighter in hiding.

Simo Järvelä, one of the players, talks about the experience of being taken away by the soldiers:

For me, the high point of the game was the interrogation, including the long walk at gun point. This wasn’t the first time for my character, so I tried to express that somehow to the other players. I ended up not doing anything without explicit orders, always moving up against the wall and showing a co-operative attitude so I wouldn’t give the crazy teenaged soldiers any excuse for abuse. It worked, they picked the other student as their target.

The interrogation itself wasn’t about whether the interrogator could extract a specific piece of information. The scene played out intensely with the bored soldiers creating a constant threat of violence. A shared understanding of the dynamics of the interrogation made it possible to play the scene with nuance.

Another player, Jori Virtanen, also wrote about his experiences with the soldiers:

When the troops escorted me at gunpoint to the interrogation room, I was shaken. The soldiers were young and brash, and visibly ticked off by our mere presence, and I knew it wouldn’t take much to set them off. I got scared they might accidentally pull the trigger, or beat me, or torture me, just because they could, and I could do nothing about it. When they asked me my name, I completely blanked out. I couldn’t remember my name.

The first thing I recalled was that I, the player, had read about this, that the fear may cause you to forget the most obvious things, like your name. And here I was, experiencing that very thing!

These musings were interrupted by the soldier who started shouting at me, ordering me to my knees. I obeyed. I felt the barrel of the gun pressed against the back of my head. The other soldier took pictures of his comrade, who was probably smiling widely. I found nothing funny in the situation. I was scared. Scared to death. I kept thinking, ”This is terrible. I may be in a larp, but stuff like this really happens all the time.”

Here’s a photo from the game: 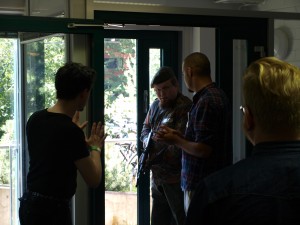 The name of the larp comes from a poem by the famous Palestinian poet Mahmoud Darwish. The above is an excrept: the full poem can be read here.